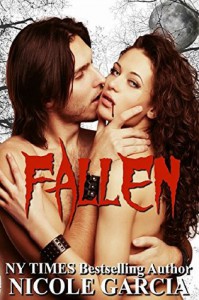 I was gifted the audio file of this book.

Gia was never supposed to be the one who fell in love, but here she was, falling for a human she had no business consorting with. Now, she is faced with a dilemma. Does she follow her heart’s true desire? Or will she make the ultimate sacrifice and let Rhett go in order to save his life? She thinks she’s chosen the right path, but when trouble comes crashing through the coven’s door she must decide whether or not her good intentions are worth the inevitable extinction of her kind.

This is book two in the series, there are 6 sisters in this coven and they will all get their story. You don't to have read book one, Bitten, before this but it helps.

Gia is the hardest of the sisters, she is the one who won't fall in love, won't take a mate, all because of what their old leader had told her one day. But Rhett gets under her skin from their very first meeting, and she, for a whole year, wipes his memory after every time they are together.  Pushing him away is the only thing to save him. But Rhett as other ideas and surprises Gia when she is at her lowest.

Again narrated by Kai Kennacott and Wen Ross. Love these two together, I really do. I noticed here, though, there was some overlapping when Gia and Rhett were talking, or rather, Rhett was laughing and Gia was talking. I don't know if this was deliberate, or not, but I really did like it! Because it happens, you know?? Someone will be talking, and someone else might be laughing at them. Cute, I thought.

Garcia has 4 more of these to write, I hope that, somewhere along the way, the boys will have a proper say, because they don't here, and while I usually prefer to LISTEN to books told in the first person, I really REALLY want to hear from the boys in this series, Rhett, especially!

4 stars for the book

5 stars for the narration